Guided tour on the marathon...keeping sporty! 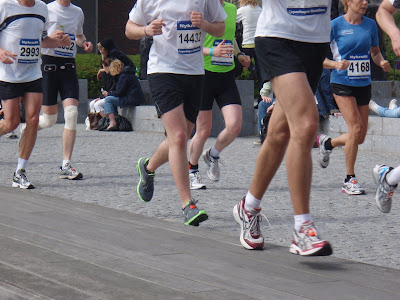 Kalvebod brygge and the Metropolzone
Guided tour organised by DAC and cphx.dk

A bit of a surprise when I ran into runners of the Nycredit Copenhagen Marathon this morning. But finally after some slalom between the streets, the runners and the many spectators I got to Søren Kierkegaards plads for the start of the tour. What I didn't imagine was that actually the marathon would follow us during the whole tour or was it us following them...Anyway, the contrast from last week's tour was drastic! So few users on the watersides last week, and a crowd - ca. 12000 runners and probably as many spectators - today!

Brave and courageous we were and especially our guide who had to manage somehow to talk over the cheering fans, the police's little ochestra playing "Under the sea" from Disney's Little mermaid and the sonorous horns and whistles of some enthusiasts.

So, starting at the edge of the Metropolzone, at Søren Kierkegaards plads, our guide presents the projects of the Black Diamond (Schmidt Hammer Lassen) and the Museum for Jewish History (Daniel Libeskind) with a reflexion on the squares at the feet of the two buildings: what are their function? How are they used? Are they used? What weakenesses do they present? The last questions here are especially relevant for the hollow space that Schmidt Hammer Lassen designed out in front of the library. Close to the building, the space is well used thanks to the café who develops its terrasse close to the water. But the rest is a huge empty space for bike-parking and well, it isn't really defined. Like if it wasn't really finished. 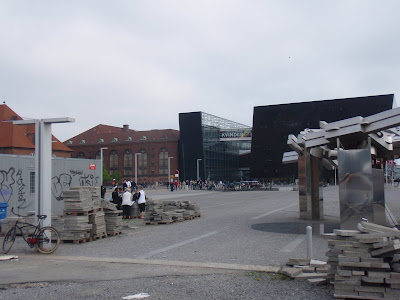 But hopefully this will change with the new building on the Bryghusgrunden, the Brewhous ground, (Rem Koolhaas - OMA) and the square would be activated by both sides. Also, Gehl architects are investigating and working on the square. They are architects but consider themselves most as urban planners and urban quality consultants. Read the famous Life between buildings by Jan Gehl and you will understand why: this is THE reference in terms of urban space and creating urbanity.

The Bryghus project is for the moment being validaded. If everything goes well the building process should start in 2011...The project is huge: a combination of offices, housing, cultural institutions, conference center, public spaces and exhibitions, urban promenade, squares and play-grounds etc. Very exciting in terms of life and flows generated and intertwining on the site.

Next stop is the Nycredit Glaskuben building and the Crystal (both by Schmidt Hammer Lassen). It must be the third or fourth time I am told about the Crystal and if I hadn't checked it out in a guide or on the architects'website, I would be able to define its function: extension to the Nycredit bank head-quarters. It seems that the most important here is the "crystal" allegory, the twisted structure touching the ground in three points and allowing public flow to pass under the building. The liberated ground will receive the Cloud landscape project (SLA, who has recently received one of the most reknow prices in the Danish architectural world): focus has been set on the different type of streams on the site, rushing businessmen, wondering tourists, Sunday walkers, bikes... each moving at their speed on their path. 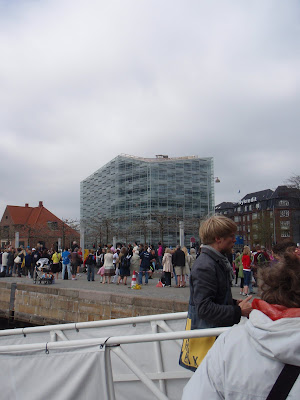 All those projects are situated only 10 minutes walk from the City Hall, Rådhuspladsen and the central station. But too few notice it. Therefore the City is aiming to develop access to the waterfront, to the cultural buildings - e.g. by creating a cultural axe - and connecting the wity centre with the new dynamics happening on the watersides, as they are developping the Metropolzone.

Kalvebod brygge, which is the name of the city part we are exploring, is about to host the Kalvebod bølge project (Julien de Smedt), in a year or so. The purpose here is to create activation/activity sites in the city and on the water. In a mainly business dedicaded area, where quite some projects have risen without a logic and harmony to their context, those interventions mean to saw together the parts, and provide the area with a regained urban quality. 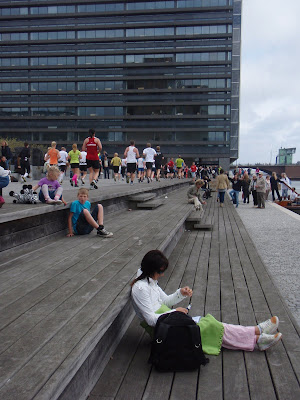 We arrive slowly to the end of the tour with the SEB bank building, designed by Lundgaard & Tranberg. True to their reputation, the detailling is as beautiful as the buildings plasticity! In fact, it appears through my observations that the plasticity can only be right when the detailling is right. Lundgaard & Tranberg are the perfect example for that! 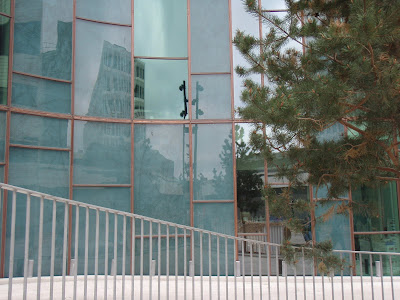 Here, between the two buildings starts also a green corridor leading down to Dybbelsbro (well, it should lead further down, in to the big DSB railway ground but no concrete plan or initiative exists yet). This green path extends from the "blue one", the main canal and waterfront. They profit from each other and should work together to bring life and quality to Kalvebod. The green path will be a part of the new green biking paths passing through the city. If I am right, the landscape architects from SLA work on this project too. 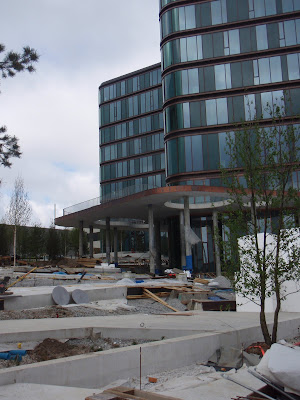 The green corridor develops up to 7 meters height, corresponding to the second floor of the SEB complex. It works as the foyer for the two buildings, as a green lung for the city and as a roof for the new part of the national archive, Rigsarkivet. More of Rigsarkivet can be seen behind the SEB buildings. A huge monolith block without windows, protecting and keeping a national treasure and heritage and the scientists and searchers working on it. The only expression outwards is the brick wall, which paterns apparently are extracted from the very first writings found in Denmark, zoomed up and applied into the facade's plasticity. 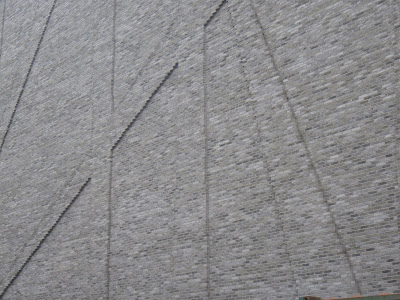 Finally we arrive at the Wake Up Hotel and Tivoli Congress Center (both by Kim Utzon). This last building is also the ending of the green floating gardens. 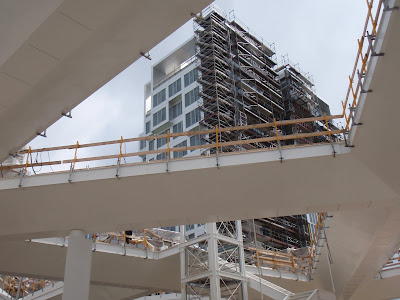 It was interesting to see and get some more details about a part of the city we already had a sneak-peak at last week tour, discovering more of the considerations behind the architecture and plans along the waterside. Copenhagen is really growing constantly. It is really good to see that the growth also is within the city borders, not expanding out on nature and agriculture landscapes, but working on the inner spaces and holes, getting more dense, more alive, and thereby also more sustainable.

I hope to be able to get to the next tour: a bike tour through Amager. We'll be seeing the neighbourhood development at Holmbladgade and Prags Boulevard, as well as biking down the whole Amager Strand Park.
Publié par Christina K V Rasmussen à 14:13