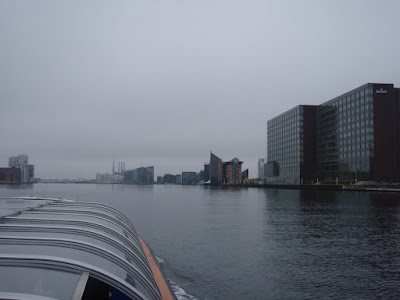 København havn op og ned - Copenhagen harbour up and down
Guided harbour tour organized by DAC and cphX
(check out the next dates on their website cphx.dk)

Rain was pouring down on Saterday and Sunday wasn't looking much brighter but nonetheless I jumped on my bike and went to the first free summer tour of DAC, a harbour tour from north to south, from Søndre Frihavn to Sydhavn. Our guide took us on a journey exploring all the thoughts, discussions, masterplans, projects and buildings - aswell the realised ones that you see today along the waterfront as those that stayed on the drawing board. 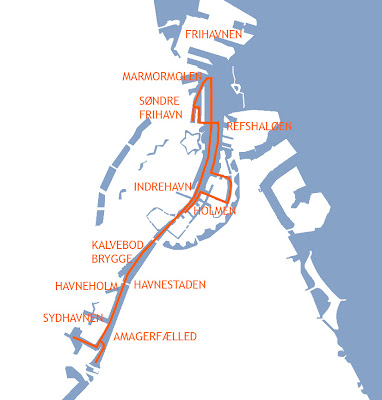 The harbour of Copenhagen has been the center for a very strong and dynamic development the past years. The industrial waterfront was emptied from life and no interest nor recognition was shown for the waterspace as quality bringing element to the city.

Since several years, the renewal of waterfronts has become a trend in post-industrial cities, such as the renewal of their brown fields. The question is: what to do with the left-overs of industry, which are parts of the city -sometimes very central and huge areas- suffering from a very negative image. Among those, the most drastic example is Liverpool waterfront!

Usualy, harbours and waterfront are planned to become the center for art and creative production, combined with culture and a dynamic mix of functions. Here I refer back to the conference of Eva de Klerck on NDSM in Amsterdam northern dockyard.

As starting point, an enquiry was made about the kind of buildings and functions that should be hosted in the harbour and what kind of typology. Henning Larsen architecture office came with the conclusion that it should be big cultural buildings, justifying the typology of the new theater (Lundgaard & Tranberg), the opera house (Henning Larsen), the Black Diamond (Schmidt Hammer Lassen) or the coming Brewhouse (OMA). The city of Copenhagen has also decided that watherver will be built down to the waterfront, it should always bee possible for citizen to walk the whole way up and down, on a public deck or promenade. This means that all projects, even housings, have to deal with complex and interessant topics such as the delicate private-public transition. The city also has developped a special institution, By & Havn, which is concerned with the development of Copenhagen harbour and Ørestad and has continually an overview on the continuity and unity between the masterplans.

Sailing North...
With much detailled explanations we sailed passed Papirøen -"Paper Island", artificial island where you find the storage for the magazine and daily news -, Holmen - old military area developped into artistic and living islands with the school for architecture, conservatory for rythm instruments and the Torpedo hall (Vandkunsten) as well as the famous Opera house (Henning Larsen) -, Refshaløen - industrial island where the underground loud and exciting parties and which is to be developped into a recreation and sports island -... 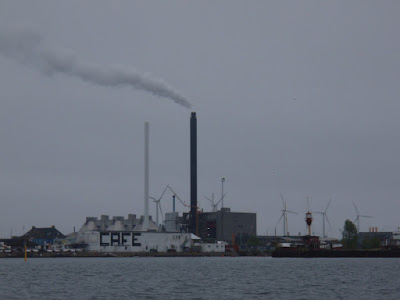 ... into the Søndre Frihavn and Marmormolen - where Copenhagen hosts the ferries coming from Oslo and Poland, recently developped and supposed to become a very lively and busy area in the future due to the hopefully growing interest from firms and professionals, and due to the coming FN-project (3XN) and tour projects (Steven Holl) on Marmormolen. 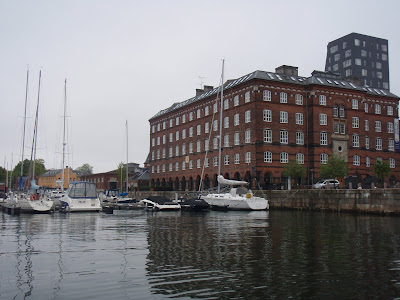 Before turning south, our guide introduces us to the coming project on the northern harbour: Nordholmernes delta, by COBE. A sustainable city part where the main objectives are on:
1. an energywise sustainable city (technicaly and materially),
2. a green mobility plan with rail connection to the center,
3. a city for bikes with the first "bike highway",
4. life in the citypart with diversity and mixity,
5. the historical connection to the maritim world as identity,
6. a city for all and for every hour of the day with diversity in typologies, functions, lifestyles and atmospheres. 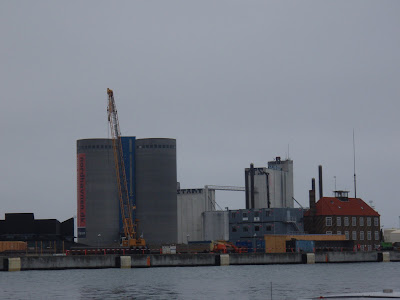 Down again...
Down Langelinie, where the mermaid should be when she isn't visiting Shanghai, we observe the dockhouses, old, restaured or just newly built, positionned along the water as heavy blocks. The tour continues passing the Kvæsthus bridge - old dock for the ferries and where you can enjoy today during the summer Copenhagen biggest beach -, the new Theatre house (Lundgaard & Tranberg), the temporary urban spaces created by citiznes along the old harbour and close to the custom house, the extension to the Royal Library, the Black Diamond (Schmidt Hammer Lassen), the museum for Jewish History of their escape from Denmark to Sweden (Studio Daniel Libeskind), the Brewhouse site where hopefully OMA's project soon will stand - a mix of cultural institutions among which DAC, offices e.g. Real Dania one of the biggest fond for the building business in Denmark, conference rooms, sun decks along the water and on the roof, housings, play ground for children and young people of all ages -, the metropole zone where a bunch of offices, hotels and conference centers (firms as Lundgaard & Tranberg, Kim Utzon, PLH has been at work there with Ticoli conference center, Wake Up Hotel, Copenhagen Island Hotel, a new bank and other firms and production offices) has popped up between the waterside and the railway.

We arrive to the southern part of the harbour with the new Havneholm and the Fisketorvet on Kalvebod Brygge. It isn't the nicest part of town, architecturally seen. The reason is that many projects have just risen there without any propper consideration of its neirghbour or context. The grounds were sold in the 1990's by the City when it was almost bankrupt: prices were low and big firms just bought the sites. No masterplan was designed and you can definately tell by the general look of it. Fisketorvet, the shopping mall and cinema, is comparable to an American mall, huge labyrinth where consumtion is the purpose and only logic: no interaction with the particular surroundings, a complicated box with a black shiny shell, no genius loci! But passing the bridge and you'll see the seducing housings from Lundgaard & Tranberg where privacy and public spaces are delicately marked via the plan, the volumes and the use of inner yards and canal. 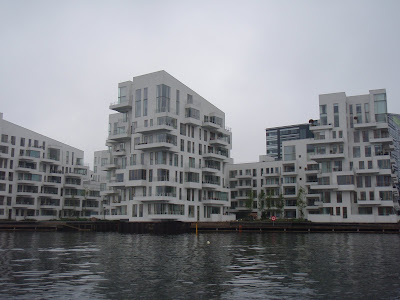 Passing the bridge of Dissing+Weitling - known also for the Storebælt bridge - we move slowly down to Sydhavn.

Sydhavnen : Teglholmen and Sluseholmen
This part of Copenhagen weren't thought to be developped once: people would never live that much south from center. So you still find some heavy industry and production buildings. 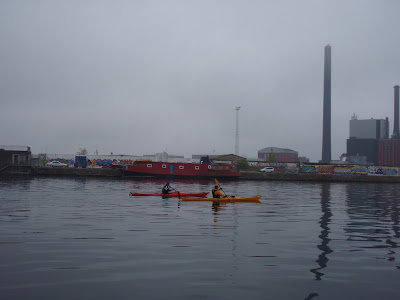 But it is also the site that was given to Soeters van Eldonk in order to create a canal city inspired by Java eilanden in Amsterdam. The Dutch studio designed the masterplan and in collaboration with Arkitema developped the typology that would suit the plan and express the differenciation between inner and outer parts, more private and more public exposed facades. At least 5 architecture studios were set on each block in order to assure variety in the facade design, probably an expression for a hoped social diversity. 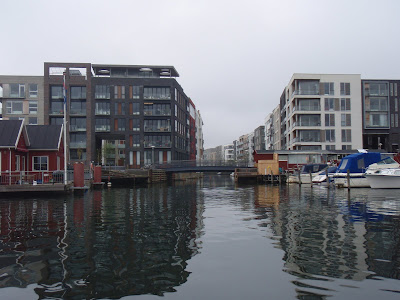 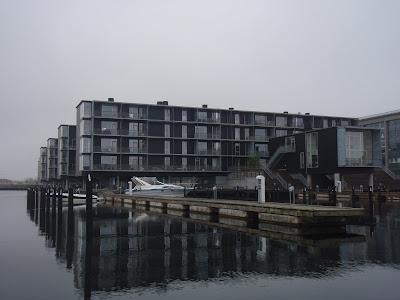 Housings by Vandkunsten on Teglholmen (old production site for bricks in Cph, tegl) - designed as houses on piers so that the ground floor is free for social-water-outdoor activities. Boats can be parked under, people can fish and clean it in the outdoor kitchen thought for that purpose... 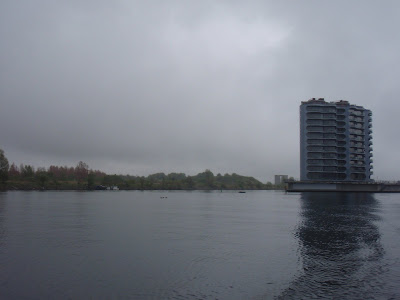 Passing by Metropolis, designed by an Indian firm and rising in the middle of the waters, we take a quick look at the last bit of ground that should receive one day the continuation of the masterplan for Sluseholmen. This part of the city is still very monofunctional and lacks easy connections to the city centre. Therefore the city has open a competition for a basic school along the water. This was won by JJW architects: their project will take as much advantage of the presence of water and is designed so sportive and recreative activities will be possible along and in the water of the canals, that way cultivating the children's relation to water. Furthermore, a bridge, designed by Hvidt arkitekter, will connect Sluseholmen with Teglholm and allow easy access by car to the city center.

Easter waterfront, the natural side...
As we sail back we pass Amagerfælled, the biggest protected green zone in Copenhagen. Behind it, lies the Ørestad and its experimental architecture. This piece of nature is used partly by garden collonies and self-builder society, Nokken. A plan is in making that would connect that pre-Christiania part of town to the city by low houses and studios, getting higher as they get closer to the Havnestad, or "Harbour city". 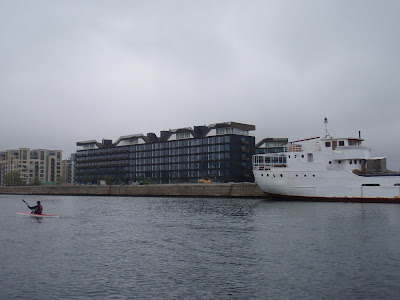 The Havnestad was the place for soya production in earlier years. An explosion put a stop to the production. Now the old dock buildings have been reused, the silos are transformed into appartments and office spaces have been created. The Gemini Residence is a work of MVRDV and JJW architects. 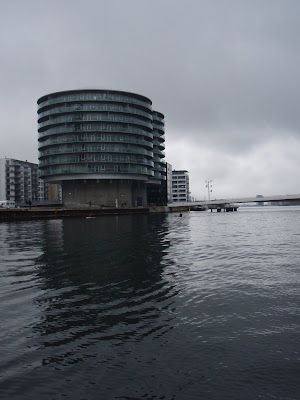 The old grain silos, the Diesel house and the red brick silos house are the three remaining silos from the soya industry. Further up, a park has been created along the water, again integrating the industrial past of the harbour: an old wagon stands in the middle, railway tracks crosses the pavement, an old wooden boat has been turned upside down and is now a kind of kiosk or scene with a roof. 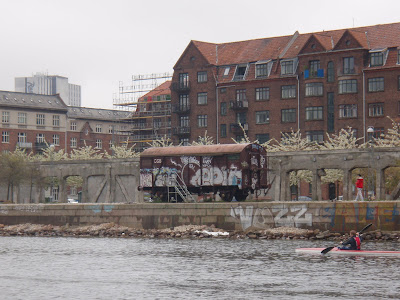 And then of course we have the well-known harbour bath by PLOT. Julien de Smedt, co-founder of PLOT before they parted to JDS and BIG, is developping a new harbour bath at Kalvebod brygge and another one will come in the southern harbour. 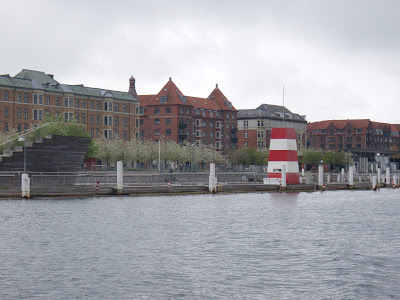 After two hours we are back, slightly wet and very cold...
But what a good overview I have now about all the projects in the harbour. So exciting! I just wish they were as lively, busy and dense as they are on paper. Of course the bad weather, the cold month of May and their young age can justify this. It takes time before a new city part is wriggling with life. I still miss maybe the physical connection between all those projects, the actual continuity that seems to be so important for both architects, urbanists and By og Havn actors. My belief is that it will appear with an even more active use of the water and not just its sides. Time will show.