Location: North from Copenhagen, at Humlebæk
Designed by Jørgen Bo and Wilhelm Wohlert
On demand by founder Knud W. Jensen in 1958 : extension for the main villa

Louisiana is this wonderful place: a museum with the finest modern art you could dream of -one of the biggest in Scandinavia!- in a building stating the best of the Danish functionalism and in a natural context that is breath-taking. I trip to Louisiana is always like an energy treat to me! I look forward to any visit and live a long time on the inspiration I gather there!

The founder Knud W. Jensen started up the museum with the intention to offer the Danes a place where they could enjoy the latest performances from the Danish Modern Art world. He had this idea to combine hot rooms and cool rooms on the visitor's road: the hot ones being the traditionnal Modern Art with wellknown and appreciated pieces and the cool ones being the last innovations eventually more complexe or provocative, more difficult to accept and understand. To this day it hosts up to 3000 pieces of post-war art history (after 1945).

The functionalist building which everyone identifies as Louisiana is actually the extension(s) to the original mansion. The dialog between the natural and biological context, the view over the Øresund and the masterpieces makes the art and space experience, one of a kind.

The sobre choice of materials the elegant lines and especially the spaces are typical for the Danish functionalism in architecture. But it is a functionalism integrated in its site and therefore much more succesful than maybe some work of Mies van der Rohe -remarkable buildings but so unfunctional in their functionalism. This integration to the site brings though one unfunctional effect: the museum is a labyrinth for those who aren't accustomed to the "wondering-around" visiting routine. The many meters of corridors -well, it is more than corridors because of the special relation to the nature just behind the window, but it is pure passage function- mustn't be very economical or ecological in terms of heating and maintenance... 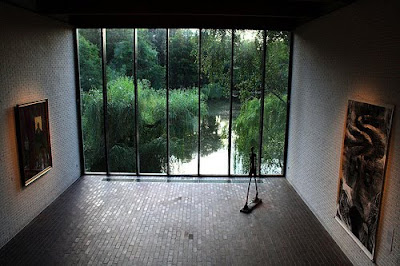 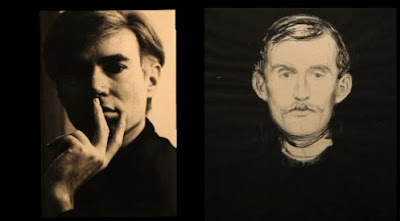 I was among the fortunate ones to see the exhibition in preview with a short presentation speach from one of the people in charge.
For those who do not know Edvard Munch is the painter behind "The scream", which reputation has overtaken his creator. Norvegian painter from the 19th-20th century he is known to reveal through his work the cruel reality of life: illness and death. Tuberculose took his mother when he was 5 and his sister when he was 13 and he was himself weak in health. That could justify why the thought of death always darkens even his most light paintings.
Illness and death are very physical in his expression, linked to the suffering body -the "Madonna" is represented with an ill-looking foetus in the left corner, his self-portrait glows out of a dark space under which lies a skeleton arm, background figures seems like gosts, faces are thin and the eyes hollow. But I mean also physical in the way he uses the brush.
Somehow though I think -I choose to think- that this dark veil doesn't have to be a depressive and pessimistic view of life but rather a stetement of a harsh reality which is to be taken into consideration in order to enjoy and taste more intensively the good moments in life -so that you are conscious about your luck as long as you live.

Facing those heavy thoughts about life, you could be surprised to see a light spirit such as Andy Warhol. But the exhibition intends to show how Warhol actually reflects more deeply through his work and, on the opposite, how Munch maybe might be more superficial. The exhibitions traces the two artists' similarities: the choice of subjects as death, fear and sexuality, the use of repetition as a tool for strong and direct communication, the use of prints and gravure, their provocative spirit and critisized work.

In fact, Warhol used four of Munch's gravures, scaled them up and tainted them with those bright colours that are so typical for his work and the work of the publicity industry: Munch's selfportrait, the Madonna, the Scream and the Broche-Eva Mudocci. Their reproduction and sometimes combination -the Self-portrait and the Madonna, as a couple and a condensed life frieze- arrise new interrogations and reactivates the feelings that were at the origin of their making, but within a new era of communication and flashy effects. 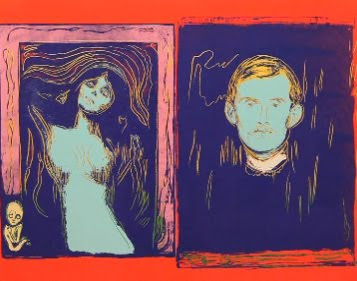 Anyhow, the exhibition is fascinating and intriguing both by its object and subjects: the reasons to oppose or unite these two giants of the Modern Art world, aswell as the two painters themselves and their work. So for either one reason or the other, go and have a look. It is definitely worth it.

Farven i Kunsten -The colours in art-, quick review of the magnificent exhibition
I was there at Easter a first time but the quality, beauty and quantity is so overwhelming that review(s) are necessary and enjoyable. The aim of this exhibition is to show the evolution of the use and reflections behind colours in mordern pictural art through the 20th century. The technic is scalled up to show how colour is used, where, in which proportion and which tonalities. The reflactions from the different painters are to read on the walls through the visit. The masterpieces and their many authors are to be enjoyed. I discovered many painters I didn't know, saw some of the gods I knew, was surprised by some sides of others, ravished by the energy they transmit to the viewer: how incredible and wonderful that such a thing as a painting -an object- can be so alive! It is just fantastic! Go if you haven't yet -the exhibition is open till the 13th June! 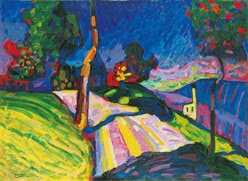